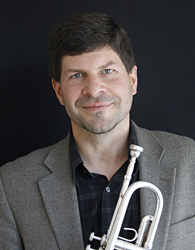 Dr. Dunn is an active performer in the Phoenix and Flagstaff areas and performs with the Music in the Mountains Festival Orchestra in summers and in the Dunn/Pennington trumpet and percussion duo. He is the former principal trumpet of the Oregon Festival of American Music Orchestra and a former member of the Oregon Brass Quintet, Aries Brass Quintet, the Denver Brass and the Ballet West Orchestra. Dunn has performed with numerous professional orchestras, including the Eugene, Utah and Phoenix symphony orchestras, and has traveled as a soloist throughout the U.S. and in Germany. Dunn can be heard on two Dunn/Pennington recordings: Steps (2008) and Old News (2002). He has also recorded with the Denver Brass, Oregon Brass Quintet, Music in the Mountains Festival Orchestra, and for several motion picture soundtracks.